I've been on a spurt of great books lately. You will have seen them over there on the right hand sidebar, in my Librarything widget, but I feel I need to tell you more about them. I feel this so strongly, that I've even written most of this post twice. Because apparently just letting Blogger autosave your message doesn't keep it in draft form. I guess you actually have to save it to save it. I wrote about most of these books on Saturday before I left work, and the message is gone! All this to say, these books are so great, I'll tell you about them twice.

My list is in reverse chronological order, so the first one I read back in Dallas, and the last one, I just put down this morning.

Posted by meteowrite at 3:16 PM No comments: 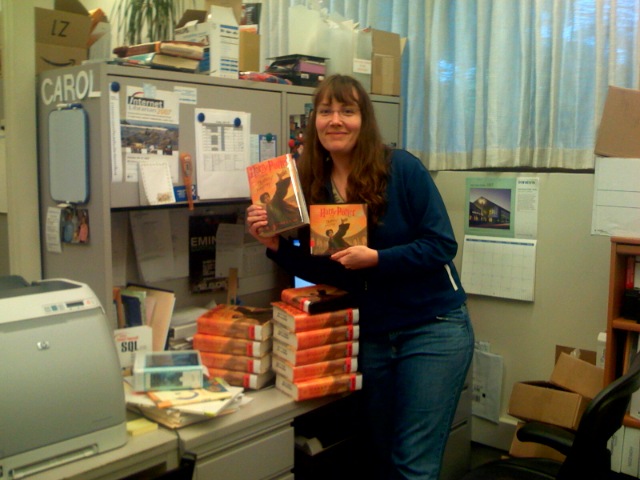 My Favorite Marathon and Tidal Waves

Ah, blog friends, I'm sorry that for the most part you live too far away to come to a movie marathon. But we did have a great one this last weekend. We started at 10 a.m., a little later than we intended, and it lasted until one in the morning. Sarah wins a prize for being the only guest to make it through all three movies, but both Lisa and N.S.L. arrived not far into The Two Towers.

It had been SO LONG since I'd seen the movies. Even little bits of the movies. I mean, at one point, I was watching some part of the movies almost daily, and it had been probably close to 18 months since I'd seen any of them. There was stuff in there I felt like I'd never seen before. Lines that seemed completely new. AND, this time through, there was the bonus of being able to say "We were THERE!" when we saw familiar bits of New Zealand.

Oh, and we had good food!! Gina stopped by and dropped off HOMEMADE donuts! Donuts, the traditional food of Bastille Day of course. Nathan and I had made homemade ice cream. There were Toll House cookie bars. I made an enchilada casserole. We had dips and chips and salsa. Sooooo much good food.

The best part though was the thoughtful discussion that came up. The Teos had some great questions about Middle Earth. "So, if orcs are descended from elves, are they also immortal?" or "If Gandalf is somewhat super-human, a Maia, how come he couldn't kick Saruman's fesse in the first movie?" or "How would Aragorn and Arwen have kids, if they aren't the same race?" I mean, these are the questions of TRUE Tolkien dorks. Between Sarah and I and Nathan searching the Encyclopedia of Arda, we came up with the answers.

I've spent every free moment since watching the commentary on ROTK. I'd never watched it before. How is this possible, I ask you. Or if I'd watched it, I'd forgotten it. But there's a bit in there about the dream of the tidal wave that Faramir has in the book, and that Eowyn has in the movie. Turns out it was Tolkien himself who originally had the dream. I'd known this at one point, but forgotten it, so I got to have the "Whoa. That's so cool!" moment all over again. I remembered we'd had a great email exchange about this. I've also had tidal wave dreams in the past and found them oddly relevant. And there are some interesting allusions to tidal wave dreams in other things I've read. I'm including our previous conversations here, because I find us so interesting. This'll be long.

Ah, technology. I've used my Google webspace and put it all on it's own little page.

Two things:
1) I got so engrossed in this project that I forgot to go upstairs and tell the knitters that their Knitting Librarian was out sick today. Argh.
2) I'd forgotten that we used to use the fact that Jim took Greek as a general Trump Card of Geekiness. "Oh yeah? You think I just did something chart worthy? Well, you took Greek!" (Jean, kind of a "You like Keeler!" moment.) But you know what Jim? Jean also took Greek.
Posted by meteowrite at 5:38 PM 4 comments:

I don't get to say that very often. Read this great column by Stephen King about the end of Harry Potter, and the end of stories we love, generally. Funny, he doesn't mention the end of Gilmore Girls.
Posted by meteowrite at 5:56 PM No comments: