TheOneRing.net is gearing up for The Hobbit. I don't check it hourly as I did in the glory days of The Trilogy (and I use Google Reader now, so I get the feed) and a lot of the stuff over there currently, even I scroll through.

But this is news like that of the Elder Days, and worth reading. Lots of Hobbit info and tidbits.

And while you're there, I'd also recommend this thoughtful entry, entitled (bless them) "The Dragon Problem." It goes on at great length about how Smaug is really THE dragon, the archetype, and how that will be tricky for PJ et al. Interesting, to me, was that they also mentioned the dragon from the animated Sleeping Beauty, which, for me has ALWAYS been the scariest thing going. Smaug, bless him, at least seemed to have some sense of humor for all his nastiness.
Posted by meteowrite at 8:38 PM 2 comments:

I just received the following email from the folks at the Career Center of my Current University:

Congratulations from the Career Center on your graduation! (Jenn : you know, I just got my grades back, and I did well, but not "Two Classes and You're Out Of Here" well.)

If you are graduating and have accepted a career position - - let us know and claim your Grad Duck! (Jenn: Hm. Sooooooooooooooooo many things to say about that one. The "if" makes it seem as though they are aware I'm not graduating, which makes me wonder why I'm getting this email at all.....is the mere mention of a Grad Duck supposed to encourage me to persevere? Is a "duck" some sort of graduation paraphernalia of which I've heretofore been ignorant? I've graduated multiple times, and not even at my preschool graduation do I remember anything about a duck. And really? A Duck? Does this remind anyone else of a certain Conflict Management Workshop that ended with the distribution of teddy bears? I mean, seriously, if ANYONE were to get excited about the prospect of a Grad Duck, it would be me. I have a duck at home amongst the rabbits, a duck who thinks he's a rabbit, and still....the idea of my institution of higher learning distributing ducks (and it's worth noting that I'm assuming this is some sort of stuffed, plush toy duck, not a REAL LIVE duck. If it's a REAL LIVE duck, we've got a whole 'nother kettle of wax going on here....I mean, that's a nearly medieval system "Congratulations on finishing school, here's some livestock to commemorate your achievement...") still leaves me a little oogie.)

I've got three more messages from my esteemed university in my box. I may have a whole farm by the time this morning ends.
Posted by meteowrite at 10:37 AM 1 comment:

Labels: back to school

You may or may not be familiar with John Green. He's written a few YA novels, one I'm particularly fond of "An Abundance of Katherines." He's involved with a site I haven't yet explored fully enough, called Nerdfighters, which is a collection of videos between John and his brother Hank.

The video prompted this post is the one with the two giraffes, and well, suffice to say, it isn't really about what it initially appears to be about. It includes both a Schrodinger's cat reference, and for those of you who've enjoyed Stephenie Meyer's books you can also see (insert minor gleeful squeal here) John Green debating the merits of Edward vs. Jacob. I won't spoil it for you.

Also, the video entitled "Three Things" has a special request for anyone who happens to work at Google. I'm just saying.

And lastly, the video entitled "Cutetacular," really is indeed Cutetacular.

Okay, it was lastly, until I found this one, which is a musical tribute to the last Harry Potter, and contains the line : "I need Harry Potter like a grindylow needs water" and more.
Posted by meteowrite at 10:47 AM 4 comments: 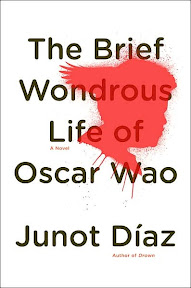 I'm just about to finish listening to "The Brief Wondrous Life of Oscar Wao." I wanted to love the book, it was replete with geekiness. It's one sentence description says it's about a guy who wants to be "...the Dominican Tolkien." And there were many Tolkien references, and other geekiness, one great line about how Oscar "wore his nerdiness like a light saber." And it had a kinda mystical realism thing going on that wasn't unlike Marquez. That was fine. All in all, I'm just kind of "eh" about this book. It won the Pulitzer this year I think, or some other major literary hoopdedoo. All in all, as I say, it gets a resounding "eh" from me.

However (you must wonder why an "eh" book gets it's own blog post) I was just flipping through the reviews and comments on Librarything, to see what the LT world thought of the book. And I was fairly well shocked by what I found. Lots of people liked it, some people didn't like it, much as you'd expect. But a large percentage of the 32 reviews written (without counting, I'd guess about 25 of them) mention how they found the authors use of Spanish distracting, disruptive or downright despicable. Okay, no one wrote despicable, but I was on an alliterative slope there. I couldn't stop myself.

I was surprised that so many folks complained about that. I found the language off-putting at times, the English, I mean, because it was frequently profane, and while I'm not against profanity to any real degree, sprinkle enough through your narrative and I'll get annoyed. I'm assuming the Spanish was fairly profane as well. I have what could generously be described as a "Sesame Street Level" understanding of Spanish, or what can be made out of understanding a bit of French here and there. And I was listening to the book, so maybe that made a difference. But I never found the Spanish in the book irritating or inappropriate. I'm stunned that other people did. People wrote that they felt like they missed a lot, by not getting the Spanish. I didn't feel like I missed anything. In fact (and again, it could be because I was listening) I liked walking around with the sound of Spanish in my head (blissfully unaware of it's profanity.)

Collectively, y'all speak too many languages to answer this really objectively, but have you ever felt alienated from a book because it had phrases in a language you didn't speak?

P.S. My favorite review in Librarything a) has a footnote, and b) has a Star Trek reference. Let me just copy and paste it here for you, Librarything's "lampland"'s comment. Temba his arms wide.

He talks like a major geek, throwing in reference after reference to various movies and comics but to what end? He continuously paints himself as an outsider, as not a geek, but then he starts talking like a goddamn Tamarian* by saying things were Mordor or that he was Kaneda and never actually explaining what the hell he meant.

(*Remember that episode of Star Trek: TNG episode where Picard is kidnapped by that race of guys who only talk in metaphors? The universal translator would translate the words but still no one knew what they meant because there was cultural, contextual knowledge that accompanied those words. "Darmok and Jalad at Tanagra" and so forth. Well, that's what this novel is like reading sometimes. Díaz will take the time out to explain Dominican history, but not tell you who Galactus is.)

There's a fire burning in the Santa Cruz Mountains today. South of here a ways, not near our beloved SLV. Heidi and her family can see the flames from their house, but they're still a good distance off too. The major inconvenience for those of us on the non-ocean side of the mountains today is the smoke. When I went through my kitchen this morning, I could smell it. When I got outside, it was like a campground. By the time I drove to work, which is closer to the fire, things were downright unpleasant. Our eyes are all burning today, and we've all got major sniffles. I can't imagine what it's like closer in to the fire. Must be miserable. We talked about closing the library (it smells like we've had a fire here, can't be good for books, staff or patrons) but the local schools are still open, so we figure we can't give up yet.
Posted by meteowrite at 10:13 AM No comments:

That's right folks. One semester of Library School down, and, well, I don't know how many more to go. I finished on Saturday in a blaze of glorious paper writing. Eight straight hours of prose about testing databases. Which is really quite amazing given how little I actually know about testing databases. Just goes to show, that really, you don't have to know much about something to write a paper about it.

I'm school-free for three splendid weeks! Nathan and I are ditching reality completely, and heading to Florida for six days at Disneyworld. I'm super stoked. I've never been to Florida. Though I said this to someone a few days ago, and they said "It's not like you'll have been to Florida after a trip to Disneyworld." Which seems a fair point.
Posted by meteowrite at 7:08 PM 1 comment:

Labels: back to school, on the road

I'm at work, getting a copy of "The Wandering Fire" ready to go out on the shelves. One of the perks of this job is that when I discover the library has made an appalling oversight in its collection, say, they own "The Darkest Road," but NOT "The Summer Tree" or "The Wandering Fire," I can take action. I can put the missing volumes in a shopping cart and they will arrive within the week. It feels good, I tell you, saving the world in this way.

So, I'm putting barcodes and stamps and tape on this book. It's an edition I've never seen before. I'm not wild about the cover (it's actually kind of hard to find these books these days...I didn't have the option of the cool paperback editions I own.) It's got a fire-colored unicorn/pegasus creature, a horn, stuck on a tree, a guy with antlers on his head, a cloaked lady with a red glowing ring....all in all, not that exciting.

HOWEVER, on the tree on the far right hand side....a heart has been carved, with an arrow no less, and the initials JW and DM. (No plus sign. Not JW + DM, which as we all know, is the appropriate way to carve initials in a tree...) I don't see any notes in the book about the cover illustration. I thought it might be the artist's initials... perhaps it is. I can't think of any relevant characters. Dave Martynuik. That fits. But not with JW. Jennifer Lowell, and Jaelle (who, like Madonna, apparently has no last name.) Those don't work.

I think we have to go with the artist. But I'm opening it up for discussion.

Also, I'd never read the acknowledgments. I'm bad that way. But Wandering Fire was written in New Zealand! In Whakatane. I would have made a pilgrimage, if I'd known.
Posted by meteowrite at 3:31 PM 2 comments:

My Day At Work Today

It's possible I have the coolest job ever. (Sometimes I have to remind myself.)

We used sidewalk chalk to decorate the fountain outside the library today after storytime. I took pictures for the library blog. 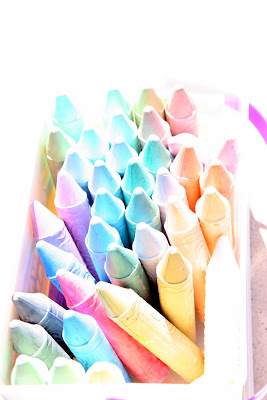 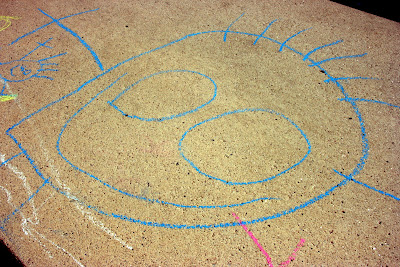 And since it's probably unethical to post pictures of other people's kids to your blog without asking them, I'll settle for only one (of the many) cute kid pictures I took. 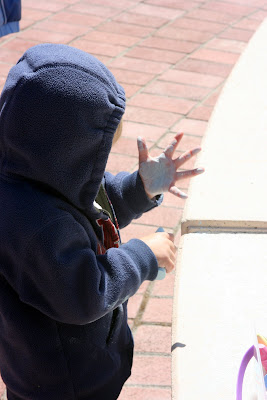 I think this guy was going to go for some chalk handprints, but I didn't see how it turned out. Perhaps one of us is walking around with a little blue handprint on our backsides.
Posted by meteowrite at 6:25 PM No comments: