What We've Been Watching

Lest you think that in my prolonged blog absence I have been unproductive (or that I've only been working and going to school) let me update you on what TV shows we've been watching. And let's celebrate, for a moment, the awesome-ness of watching TV on DVD. How amazing is it to have a whole season of a cool show at your disposal? You can watch episode after episode after episode without the annoying time lag of real life. And no commericals to fast-forward through. Plus, if you are clever (which of course you are) you can check TV DVDs out from your local library, and then it's not only outrageously convenient, it's also free.

The only (slight) drawback is that you're always behind the TV curve, and realizing how amazing some shows are long after everyone else is already done talking about them. Luckily for all of us reading this here blog though, none of us are particularly current in our TV viewing. 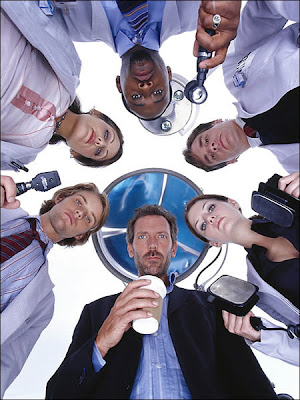 Our oldest "new" show is House. I haven't liked a medical show since I gave up on ER all those years ago. I never really got over Susan leaving Dr. Green like that, even though I continued to watch for years. We caught a random episode in our TiVo one day, and were hooked. We've watched them all (or nearly all) now, and it's fantastic. Great ensemble cast (you'll notice that's a theme in the three shows I've got listed here,) great writing (another theme) and mysteries to be solved in each episode. Though, I can tell you this much, if you start watching, the answer to the medical mystery is never, ever "lupus." 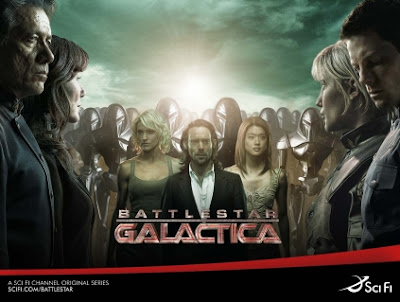 Then, when we'd just about finished up with House, we took up with Battlestar Gallactica. I was, I admit, pretty skeptical of this one, and only started watching because I was sick one day and not interested in leaving the couch when Nathan started it up. I mean, everything about the words "Battlestar Gallactica" calls to mind hokey late-70's spacey sci fi. Well, darn. I was wrong about that. It's so good. Worth watching for those of you interested in character development (I'm particularly fond of Kara Thrace, I must say.) The music is really interesting, too. Not to mention the plot! I could explain it, but it would sound hokey. I mean, see, the humans, they made these robots, but oops! the robots decided to rebel. Then they got even smarter, and now they are trying to take over the galaxy. Note to self: The robots will always rebel. Be kind to the Roomba. I'm not sure if it translates, if you haven't been watching the show, but there's a great YouTube video out there called "What the Frak is going on?" which sums up the first 3.5 seasons in 8 minutes. I've watched it many times. Anyhow, Battlestar Gallactica. Watch it. 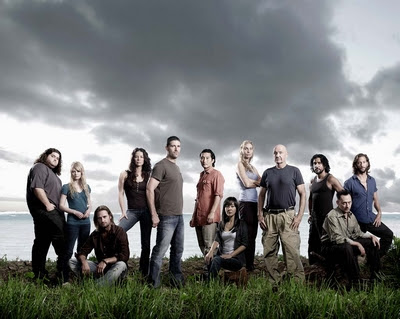 While we were in Dallas for New Years, we tried to get Lou and Cheryl hooked on BSG. Instead, they got us hooked on Lost. We spent several days watching one episode of Lost, then one episode of BSG. Ultimately, we finished the season of BSG that we had packed, and we watched only Lost. For days and days. A truly great vacation. Currently, we are only two episodes away from being caught up with "real time" Lost. The stuff that's on the air now.

Why should you like Lost? Well, first off, you get to see what Dominic Monaghan did with his post LOTR life. Hm. This is a travesty, but I'm considering typing "I like him better as Charlie than as Merry." I KNOW! I can't explain it. Lost is occasionally creepy, often funny, sometimes more violent than I'd like. Sometimes they eat bunnies. I KNOW! I can't help it. I think the thing I like best is that I never really know where I stand with this show. You never know who's good, or who's about to trick someone else, or who might do something you'd never in a million years think they would do. You do know that everything is connected, so if you stumble across a dead guy in a VW van in the middle of a deserted island, there's some reason he's there that relates to the story at large. And, lastly, why you should watch this show on DVD -- it's cliffhanger central. These people are masters of cliffhangers. I have no idea how people who watched this show air on television once a week didn't collapse of curiosity.

(P.S. It has taken me THREE DAYS to write this post! I can't figure out why blogging is so hard these days!! I have lots of ideas of things I want to blog about! I just can't get them written.)
Posted by meteowrite at 11:39 AM

True story about Battlestar Galatica--Netflix has provided us the first season so far, and you know, not too shabby. It's no Firefly, but then, nothing is. So, Jenn, how are relevance and precision or whatever they're calling it this year? ;-) Hope the program is not killing your soul!