I've been doing an inventory of my archives lately.  The places I am recording things about my life, or about the boy's lives.  It's rather a stunning list.  Wanna see it?


Then, there are my "archives..." including old journals, letters and other ephemera that I am slowly, slowly, slowly beginning to digitize and organize in private blog form.  Talk about a bucket list project.

And yet....and yet....I've felt compelled lately to do MORE.  There are several moms out there on the internet doing all sorts of interesting projects that just SING to me.  Come join us!!  We will assimilate you!!  I envy them their creative spaces, their beautiful finished products and, heck, sometimes, even their bubbly girly handwriting.

There's an angel that pops up in Job's Daughters lore, I don't know if she's really in the Bible, or if she's Job's specific, the Recording Angel.  She's there jotting down notes (and in this day and age, you'd have to think she's shooting some photos, making some YouTube videos, and checking various Facebook statuses) of everyone in the world, and noting who's Naughty and Nice.  I think Santa sends his elves to intern with her before they are promoted to his list making services.   Anyway, the Recording Angel.  She's probably my patron saint.

I tell myself that there is always a fine line where Recording = Not Actually Living, and that these blog moms may be missing out on the actual moments they are so busily shooting and scrapping.  (But darn, do they seem to go to fun places and have organized closets and make beautiful Halloween costumes.)  I remember that moments when I'm not actually savoring the awesomeness of two growing boys are wasted, even if I've managed to capture it perfectly in a photo.

The other thing that strikes me lately is how many events in my life I would have LOVED to have recorded with these new-fangled web thingies we love now.  Shoot, jean, if you'd blogged from France?  If H had Facebooked from Nicaragua?  I remember distinctly, somewhere around 2000, right when I started to take all those web classes, thinking, "Could I make a web space where all the teos could post little notes about what they were doing?  We could talk to each other online, leaving little comments on each others updates?"  Dude.  I INVENTED FACEBOOK.  Sorta.  What if I'd had a digital camera when I went to Wales?   What if I'd started using Photoshop earlier?   Think of the things we could have captured as short videos (can rap, polka breaks, Seder at 512 Second Street?  just to name a few)....

It would be nice, in that the digital trail would already be in place.  Keyword searchable, so perhaps we might have a record of what Jean really meant when she uttered "That's just one dipthong away from Honkey..."  Which I have scribbled on a piece of paper somewhere. 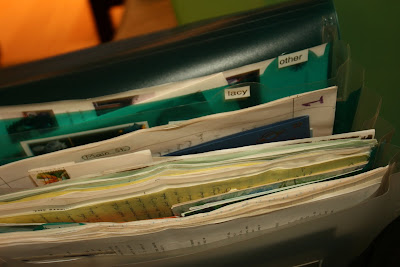 On the other hand, we wouldn't have written as many letters.  We wrote a lot of letters.  This is one third of the letters I have organized and collected in one place.  We wrote LETTERS.  Anais Nin would be jealous of the letters we wrote.  They were juicy and long and frequent.  Partly because we were younger and had more disposable free time, and partly because we were full of angst and creativity and we were apart when we were used to being together.  But also, I think, partly we wrote such letters because we didn't have blogs or Facebook and we couldn't send text messages or check our email on our phones while waiting in line at the grocery store.
Posted by meteowrite at 4:31 PM